Astronomy has been around for thousands of years, however, has only been advanced significantly in the past few hundred years due to the advent of modern observational technology such as telescopes or binoculars.

In fact, the first patent for a telescope had been recorded around the early 1600s by Hans Lippershey as an object for “seeing distant things”.

You may even recall that most pirates also used a form of pocket telescope, not necessarily for observing the stars, but to spot marauding boats in the distance.

Being able to see across greater distances isn’t just important for astronomy, and as we can see, there’s been a vested interest to improve this technology for many different applications.

With that said, astronomy remains the de facto reason to invest in a telescope and remains one of the most popular hobbies of the age.

We want to allay your fears and explain that astronomy doesn’t have to be hard.

That’s because there are many different areas of astronomy that you can get into that help you contribute towards the advancement of this science.

Some areas of astronomy are harder than others but because it’s so diverse, you can easily choose the area that best suits your skills.

As a hobby, most people engage in astronomy for fun and not necessarily to make a big name for themselves, however, it’s true that some amateur astronomers have made significant discoveries and you could be a part of that circle too if you remain vigilant.

In fact, that’s the part we’re going to explore today and why people enjoy it so much as a hobby. 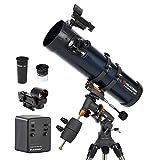 Look Upon the Stars: 5 Reasons Why We Love Astronomy

As a hobby, astronomy is really budget-friendly and can allow you to fill your spare time with heaps of fun without needing to break the bank.

Depending on your desires, you can go for a low-cost telescope that can help you achieve many of the same things you could with a professional telescope; we dare say that it’s better to get to know your needs first before investing lots of money.

Once you have your telescope, the ongoing costs associated with astronomy are relatively low which means you won’t need to splash out again until your next big upgrade.

In fact, if you’re only interested in observing things within our solar system then you can usually get away with a good pair of stargazing binoculars which means you’ll be spending even less.

2. Stargazing is a great date idea

As a hobby, stargazing is great because you can easily include your friends, family, and significant other meaning you’ll always have something fun to do.

We recommend combining your stargazing activities with camping as it means you can spend the entire evening checking out the night sky whilst having somewhere to rest once the fun is over.

It’s also a great idea for a date because you’ll be able to make a campfire, toast some marshmallows, and even listen to some music while you’re both browsing the scar of the universe.

In fact, few hobbies are both fun and romantic and are unlikely to enlighten one’s horizons quite as much as astronomy.

3. Astronomy gets you in touch with your philosophical side

Lots of hobbies challenge your mind, however, few challenge them quite like astronomy.

That’s because when you’re looking out at the vast expanse of our universe, numerous questions are likely to pop up such as “are we alone?”, “How did we come to be?”, and “how will the universe end?”.

These questions then lead to deeper, more reflective thinking which actually makes you look within.

In fact, it would seem counter-intuitive that the activity of looking at things so far away could make us so pensive or internal, however, many astronomers seem to explain feeling the same way and that they end up following the same line of thinking which leads down the rabbit hole of existential questioning.

4. Stargazing can give you a greater appreciation for our existence

When you look out into space, the solar system, and the greater observable universe, you’ll almost always end up with a deep appreciation for our existence as a species especially since space can be a violent place to host even the smallest forms of life.

Literally, no other planet in our solar system is known to support any kind of life; even Mars is not quite a given yet and there are only theories that it may have been able to host life at some point hundreds of millions of years ago.

Even with an abundance of water, having the right temperature and an atmosphere to protect from deadly UV radiation is vitally important: without this holy trifecta, it’s unlikely that life will be able to sustain itself long enough to propagate and eventually evolve into different advanced species.

The idea that we’re a beautiful mistake is a poignant but poetic evocation; this is why we love astronomy so much and why countless millions of people the world over also do too.

Most people get into astronomy to spot the odd planet or star, however, it’s quite possible with enough time and persistence that you could be the next big name up in lights because of a huge discovery.

As we mentioned above, amateur astronomers are regularly celebrated for their achievements and there is even a dedicated awards body for observing and honoring these accolades.

It’s cool to think you could be part of history just for doing something you love which is not something that all hobbyists can say.

For example, one of the most notable amateur stargazers includes George Alcock who is attributed to discovering a mixture of comets and novae.

Astronomy is a beautiful, productive, and insightful hobby which makes it one of the best.

You can do it for enjoyment or you can seek out bolder achievements such as being able to contribute towards the advancement of this field.

As a hobby, astronomy is relatively inexpensive yet can reward you with heaps of fun for many years.

Lastly, it makes for a great activity not just for yourself, but also for your family, friends, and significant others by uniting them in a common activity that is easily understood and appreciated.

Basically, you don’t need to be an expert to appreciate the beauty of the moon and its various seas and craters, nor the beauty of Mars when it’s positioned just right in the night sky for all to see.