PC gaming has been a long time in the making to get to where it is today, it didn’t just pop out of nowhere so to speak.

As a niche, PC gaming has been an iterative process refined over many decades — in fact, the first-ever game, Spacewar! was developed all the way back in the early 60s.

It wouldn’t be until the 70s, though, that we would see widely available commercial systems available for consumer purchase.

Fast-forward a couple of decades to the widespread launch of dial-up, this is when things really started heating up for PC gaming all around the world.

Ever since then, online gaming has redefined what it means to be a gamer, especially a PC gamer.

So, why should you pick PC gaming over other formats, what’s all the fuss about?

PC Gaming Is Worth It: Here Are 8 Good Reasons Why You Shouldn’t Miss Out

Whilst you’re here, why not check out our recommended gaming PC selections? 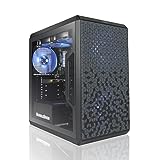 1. You’ll be part of a community unlike any other

The PC gaming community is loud and proud.

If you’re a console gamer, you may have already been in a few heated debates with PC gamers between which is better and why you should pick one over the other.

With that said, the PC gaming community is one of the most helpful, diverse, and passionate communities in the world, and better yet, there are so many exciting games to play and be a part of that you can share with this community.

In fact, PC gaming has often spawned the latest trends that eventually trickle down onto consoles once they become mainstream enough.

Basically, PC gamers are the alpha testers of the gaming world, often getting access to the latest developments first.

If you’re an exploratory person and enjoy the prospect of being at the forefront of gaming innovation then you’ll love being a PC gamer.

It goes without saying that gaming systems are far more versatile than their console counterparts.

That’s because a PC can be modified both on the hardware and software side of things meaning you can often tackle a variety of tasks that usually aren’t suited to a console.

Essentially, this mostly boils down to the fact that you have a mostly open operating system such as Windows, Linux, and heck, even MAC these days.

Files can be edited, interfaces can be changed, hotkeys can be programmed, and hardware can be swapped out.

Instead of waiting 2-3 years for a new console iteration, why not just move with the times instead?

If you need flexibility and a versatile machine then you’ll soon realize that a gaming PC isn’t restricted to purely gaming, you can be productive too.

3. You can tailor-make your gaming system

Consoles are great and often come in a few different variations, however, they’ll never be able to match up to the total customization that a gaming PC can offer.

You can literally build your machine from the ground up with your very own case, power supply, graphics card, memory, processor, cooling systems, and even the lighting.

However, it doesn’t stop there as you can also augment your gaming experience with external peripherals such as mechanical keyboards, studio equipment, controllers, and even full VR setups.

Basically, you can make something that is one-of-a-kind meaning you’ll be able to totally satisfy the vision that you had in mind and bring it to life in the real world.

And lastly, even if you’re not a dab hand at building your own system, you can still specify exactly what you’d like to be built which can then be delivered to your door in a timely manner.

4. You get access to Steam and other gaming outlets

There’s no cheaper way to get games than through Steam and some of the other bargain outlets such as G2A.

Unlike console gaming, you get access to multiple gaming markets rather than being restricted to one.

This means you can compare the market and find bargains that wouldn’t usually be possible on a console.

We think having more choice is always a bonus as you’re not beholden to one company deciding what they should charge their community.

Yes, AAA titles will usually command a hefty price regardless of where you source them from, however, having the possibility to compare a few places is a luxury that we wouldn’t want to lose (as PC gamers) any time soon.

5. Modding games on PC is much easier

The base game was great, but the modded possibilities were infinitely better.

It made a game that should have lasted a week at most, last for multiple years even to this day.

It’s still one of the most actively played games and still has a thriving online community thanks to mods.

This kind of innovation started with PC gaming and has eventually started to trickle down to consoles too.

With that said, it’s still much harder to mod console games as they’re not always supported by the system.

With PC, there’s nearly always some kind of workaround that allows us to mod our games which we think is brilliant for longevity and getting more out of our games.

If you’re an enthusiast for the latest graphics then there can be no better option than a gaming PC.

Yes, it’ll set you back potentially thousands of dollars, however, it also means you’re one of the privileged few who get to witness the latest gaming creations in all their finest glory as soon as they’re released.

In fact, PC gaming is often at the forefront of both graphical power and also being able to support cutting-edge resolutions such as 8K and above.

This simply wouldn’t be feasible on a console machine as they’re often restricted to set resolutions or won’t run properly above them.

One thing to bear in mind is that our society is advancing at an almost exponential rate technologically speaking; only a gaming PC has the flexibility and capability to support such fast advances.

Don’t be left behind.

If you’re considering a career in streaming or gaming then it’s probably worth considering making the switch to PC gaming.

That’s because a gaming PC can support multiple streaming formats, whereas consoles often use proprietary or gimmicky services that restrict your flexibility.

Not only that but you’ll also have more options for peripherals such as studio microphones, soundcards, external capture cards, and other niche nice-to-haves that can really open up your potential to develop a successful streaming career.

Basically, PC gaming gives you full autonomy over the decision-making process when it comes to streaming meaning you’ll never be restricted or have to compromise on making the choices that fit your style.

Okay, this one’s a bit of a joke but it’s true that gamers take their lighting and color coordination seriously.

Why have a plain old black controller when you could have a keyboard that allows you to program each individual keys backlighting?

You’ll get access to nearly every color of the rainbow and better yet, this can all be implemented as part of your full system through services such as ASUS Aura Sync or MSI Mystic Light.

In fact, nearly every component that’s sold for gaming PCs these days is launched with some kind of RGB lighting option meaning you can totally dictate the aesthetic in a rather satisfying manner.

So, PC Gaming Is Great, but Are Gaming PCs Worth It?

Yes, by all means, a gaming PC is totally worth it.

In short, you don’t have to pay thousands to get a half-decent system if you don’t want to.

In fact, most games are designed with low to mid systems in mind as it means they can maximize the number of people who can play.

As well as that, gaming PCs are modular meaning you can iterate on them and upgrade whenever you want to.

You can do it piecemeal or overhaul them all at once depending on your finances.

Lastly, gaming PCs are often at the forefront of hardware innovation meaning you’ll often get access to the latest technology first.

Who wants to watch everyone else have the fun when you can join in too?

If you enjoyed our article, don’t forget to save our homepage to your favorites for more hobby updates, product reviews, and gaming information.